I'm sorry to have to admit that I didn't pick the right week for my 7 Untried Things in 7 Days-challenge. Yesterday I had an awful day at work, and an awfully long one too. When I finally got home I had a long conversation with mum on the phone, discovered that it was awfully late, quickly got out some untried art supplies, did some research and realised that it was bedtime. And it seems that the rest of the week will continue in the same pattern, so I decided not to burden myself further with this challenge right now, but to wait until things calm down a little. I snapped a quick photo, though, to show you that I'm not trying to wriggle myself out of the challenge. Here's a little collection of art supplies waiting for their chance to show what they're made of. 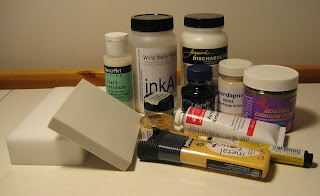 But, Mousie, thou art no thy lane,
In proving foresight may be vain;
The best-laid schemes o' mice an 'men
Gang aft agley,
An'lea'e us nought but grief an' pain,
For promis'd joy! 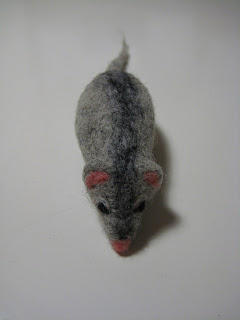 Like, I guess, many other artsy-craftsy people, I'm World Champion when it comes to buying new art supplies and then forgetting to use them. My shelves are filled with stuff I've bought with good intentions, but that I've somehow managed to forget to explore and use, because another interesting thing came along and grabbed my attention. It's a severe case of AADD, i.e Artist's Attention Deficit Disorder.

Therefore, I decided that my next challenge will be to look through my shelves and try one unexplored material/art supply every day for 7 days. I had a warm up exercise yesterday with a set of pastel pencils that I've have for years and years. I bought them after I'd been to an exhibition of children's book illustrations. I was blown away by some pastel drawings and when the aforesaid pencils were on sale a little later I splashed out. And that was it. Since then they've been part of my standing exhibition of art supplies.

So yesterday I grabbed those pencils and some cool black drawing paper I also bought in a sale a while ago and set to work. Oh my, I enjoyed it! The inner kindergartener in me revelled. I didn't do any planning, I just doodled with coloured shapes. I'm afraid that the fixative darkened the colours a bit, and the scan didn't do much to improve the situation, so the drawing may not look as vibrant as it looked to me while I was working. The result of working pastel pencils over black paper reminds me of batik fabric, and this is something I'd like to explore more. 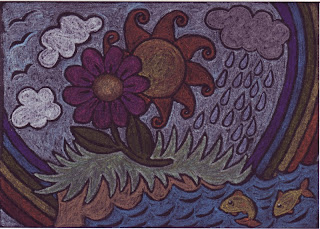 Here are the last five stamps in my 12 Days, 12 Stamps challenge. My mock carvings inspired me to move onto runes, but first I decided to challenge myself and the craft foam with a more intricate letter. I simply wrote a capital A in a font I liked in a text editing programme, enlarged the letter until I was happy with the size and traced it right off the screen. I cut it out very carefully and got two stamps out of one: a positive and a negative image. Fun!

I've been rather busy this week, so the runes were a good choice as they were simple to make. I picked the ones that spell my name. I hope I picked the right rune for A, because there were two different ones, and I didn't have time to study them further then. It seemed a bit complicated. I'm planning to make the whole futhark eventually. 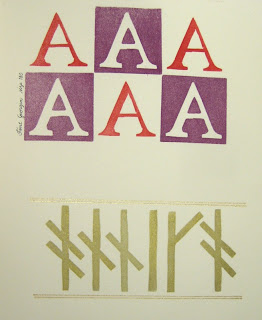 Here's the whole collection together with my sketchbook: 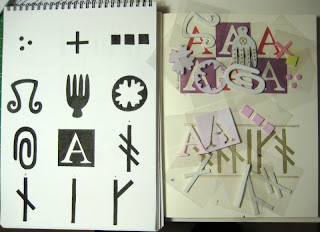 I haven't yet decided what my next challenge will be, but I'm thinking about a "try-something-new-every-day"-challenge.
Posted by Annika at 19:59 2 comments:

Things were starting to feel a little too geometric, so I decided to move on to more organic symbols. I'm interested in symbols and signs, so when I found a book about symbols on sale a couple of weeks ago, I bought it. It's written by a professor, so it should have some scholarly merit, but I mainly bought it for the beautiful artwork, to use for inspiration.

I've been planning to make a series of stamps based on ancient rock carvings and runes (please refer back to this blog entry for more on that subject). While doodling at a seminar last weekend I started drawing rock carvings that I made upp - mock carvings, you could say. They're based on real rock carvings that I'm familiar with, but I tried to avoid drawing them exactly like the real ones. 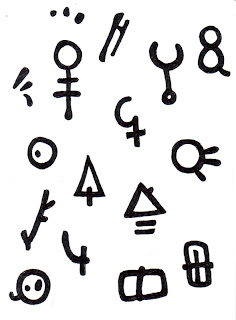 My first plan was to turn these doodles into stamps, but then I had another idea. I decided to take objects in my home that didn't exist in prehistoric times and make them look like something that prehistoric man might want to carve into a rock.

Mock carvings inspired by objects in my home
(a metal clip for a picture frame, a fork, a clock, a paper clip) 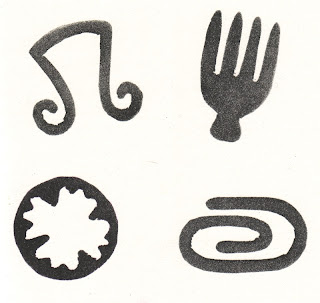 I made one practical discovery:
For more intricate shapes and small curves it's better to use something other than craft foam, unless you don't mind a jagged line.

And one interesting discovery:
I transfered the image to craft foam by drawing it with a soft leaded pencil on a piece of paper, flipping the paper over onto craft foam and rubbing the back of the paper. To reinforce the line I used a purple multimark pen. Here's the discovery: after I'd stamped the image I made a second (ghost) stamp and to my surprise, the purple line transferred: 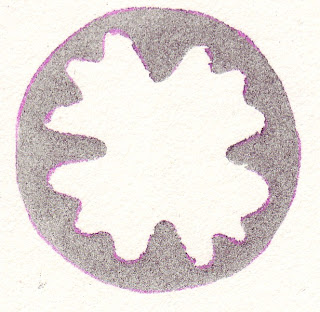 This could be a bad thing, but it could also be used for some really cool effects: 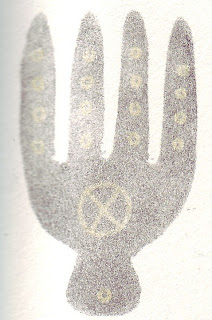 The scan is of pretty poor quality, but I'm sure you can still see the markings I've drawn with a yellow multimark pen on the fun foam before I applied the ink. This has potiential, don't you agree? It just needs a bit more experimentation, because I don't know yet what it is that makes the pen lines trasfer. I used VersaCraft ink. Perhaps the ink dissolves the permanent ink in the multimark pen.
Posted by Annika at 11:30 2 comments:

When I made stamp #2 I was left with 4 little squares. I took these and made what I think of as Charles Rennie Mackintosh squares; in this case a single square and a triplet of squares. Here, however, I didn't use them in any particularly Mackintoshish way. Just a play with squares. The patterns on the right side of my sketchbook were made with the single square, but could be made into stamps of their own to save time, especially if you want to make chequered borders. 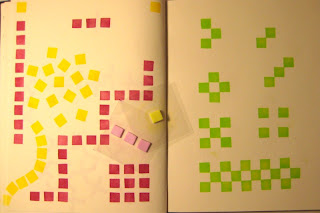 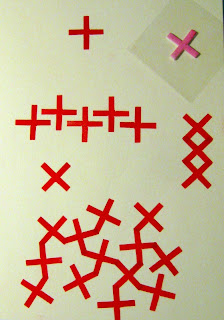 I've embarked on another little challenge for myself. This time it's about stamps. I still have certain problems with stamps, and haven't completely figured out what they can do for me. But I'm getting there. My main problem with stamps has been that a lot of them are what Gwen Diehn refers to as 'determined materials' in her book The Decorated Page, i.e. materials that themselves carry a strong message that may override your own message. I've written about my relationship to stamps before here and here.

To help me along with my stamp-making I decided to challenge myself to make a stamp a day for 12 days. The number is of no significance: it's just the number of squares that fitted on an A4 page in my sketchbook. To make things as simple as possible I'm going to make the stamps out of craft foam and mount them on a A4 transparency sheet that I've cut into 12 pieces. Please refer to my earlier blog entry for a description of the technique.

This challenge also ties in with this month's theme in The Sketchbook Challenge: Doodles. I haven't been active in TSC for months, and it's about time I got back in again. I've done some doodling this week and I figured that I could use my doodles as inspiration for stamp-making.

Here is a doodle I did yesterday. I like the way you can create texture with just a simple mark such as a small circle. I want to explore this more. 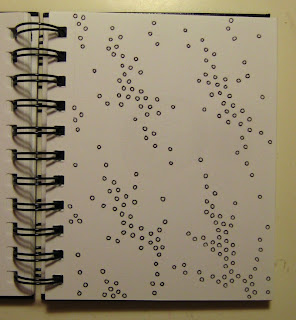 Here's another doodle - one that I did earlier in the week. There is a lot I could pick out from here for stamp-making. 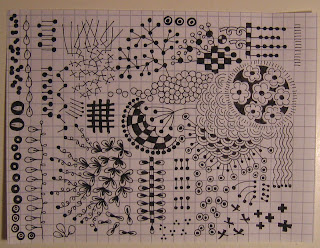 I'm going to start with the three small dots that have followed me since I was a teenager. They have a tendency to sneak into my drawings as soon as I look away, so I might as well embrace them as Lundadoodle no 1. 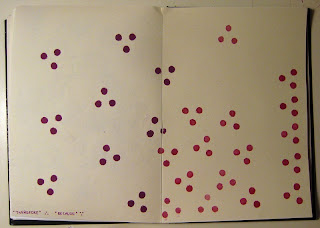 Here are some images from my walk today, for inspiration. I've followed my physical therapist's advice and stayed away from knitting, crochet, sewing and embroidery. She also recommended brisk walks. Well, today I brought my camera and found lots of things to shoot, so the walk wasn't very brisk. But I got lots of fresh air. And a little frost-bitten. 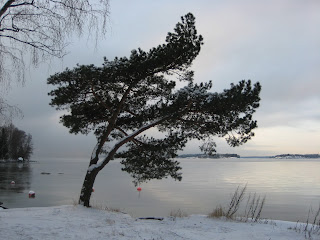 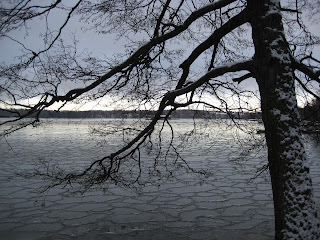 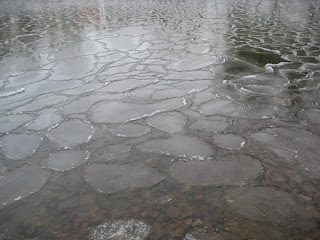 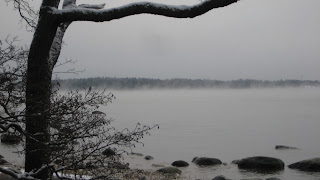 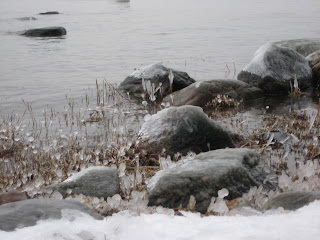