Music... With a Touch of Red

I realised that it's been two months again since I updated this blog. The days run like rabbits. Soon it'll be Festival of Quilts in Birmingham again, but I'm not going this year either. I'm hoping to get a chance to go there next year. Until then, however, I did the next best thing: I sent in an entry for the European Quilt Association's annual challenge, and it was accepted as one of the 16 quilts that are sent to Birmingham from Finland. Some of you may remember that I participated and was accepted last year too, and that quilt is now on a two-year tour around the world with the rest of the quilts in the exhibition. The theme last year was The Seasonal Garden, and spring was the season given to Finland. Here's a link to last year's quilt, Wake-Up Bells, as well as an image to remind you. 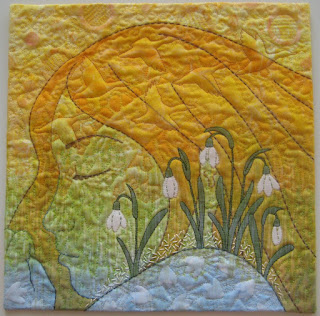 So, last year's quilt celebrated spring, light, warmth and budding new life, but this year's quilt turned out to be the exact opposite. The theme is Music... With a Touch of Red. First I was at a complete loss how to interpret it. I like music as much as anyone, but for some reason the theme didn't speak to me. So I started focusing on the red bit, and though that music with a touch of red hints at some form of drama or tragedy. And then the idea came to me: I would interpret the myth of Orpheus and Eurydike.

For those of you who don't know the story, Orpheus was a legendary musician who could charm even a stone with his music. On his wedding day, his beloved Eurydike was bitten by a snake and died. Crushed by grief Orpheus travelled all the way to the Underworld to play his music before Hades himself, in the hope of softening the god's heart so that Orpheus would get his wife back. The plan worked and Hades agreed to let Eurydike return to earth on one condition: Orpheus had to walk in front of her and could not turn around to look at her before they both had reached the upper world. Everything went well until Orpheus stepped out of the Underworld. Then he forgot that the condition was that they both had to be in the upper world, and he turned around, and Eurydike vanished and was lost forever.

I felt very excited about this theme, and decided that I wanted to depict the very moment when Orpheus turns around and realises what he has done. I used photographs of my own face to help me with the facial expressions, and Wikipedia to help me spell the words in Greek (Orpheus, Eurydike, tragedy and music). Here's the whole quilt: 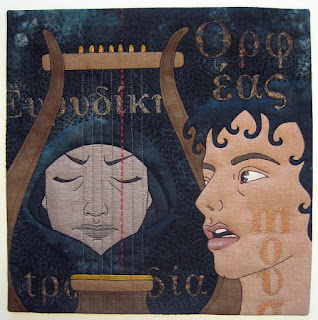 I painted the fabric for the faces with a silk paint I mixed myself: a warmer tone for the living Orpheus, who's just stepping out into the upper world, and a paler and duller tone for Eurydike, who's fading away into the Underworld. The facial features were filled in with a permanent pen (as a guideline to where I was going to machine stitch the features) and fabric paint. 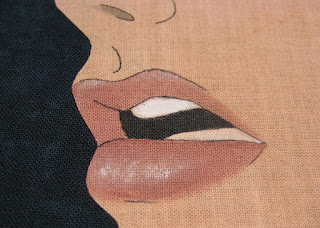 I covered the raw edges with black chiffon and machine stitched outlines and features, as well as text in Greek, which I eventually filled with metallic fabric paint. 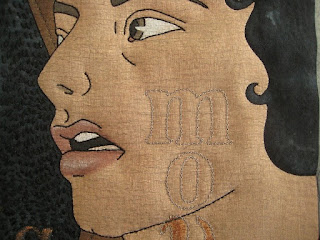 The quilt was started a little too close to the deadline, so my first plan was to keep handstitching to a minimum to save time. However, after I had machine quilted part of the background I didn't like the result. It looked dull and lifeless. I realised that just because the theme of the quilt is death, the surface itself needn't be dead. So I tried some handstitching in another spot, loved the result, ripped out the machine quilting, assumed a comfortable position and started handstitching. I stiched for hours and hours several days. Crazy, but it was so worth it in the end! I love the texture. 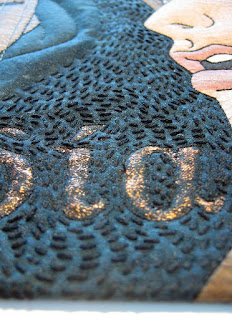 A touch of red. Eurydike has to return to her Underworld prison. The strings of Orpheus' lyre form the bars that lock her in and separate them. 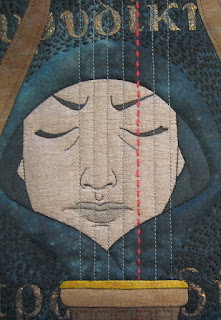 Thanks for visiting my blog!