From Cuffs to Colour

After my second intense dyecation it's been rather quiet in the dyeing department. True, today I did some dyeing, but it was just overdyeing a pair of sun-bleached cargo shorts. Nothing much to blog about there. Last Sunday was Mother's Day, so I spent the weekend with my folks up north. On the train journey there and back I knitted and crocheted a pair of cuffs. I bought a kit with patterns and materials for a scarf, cuffs and a brooch from a local craft shop, Taito shop Helsky. Everything apart from the brooch is finished and ready to wear: 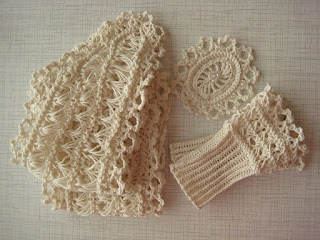 This is what the scarf looked like when I started. It didn't look very promising at that stage, but it turned out fine. 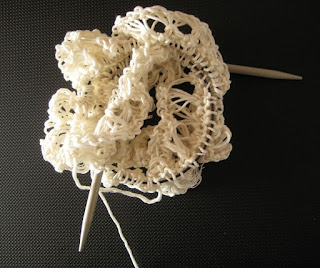 A couple of days ago artist Melanie Testa's new book Dreaming from the Journal Page. Transforming the sketchbook to art lay on my doorstep when I got home from work. 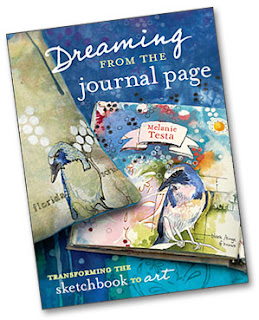 It's been a long and impatient wait, and now I'm eager to immerse myself in her wisdom. I started today by jumping straight into a couple of the colour exercises in the book.

First I did a colour chart of the watercolours in my palette. I use Royal Talens's van Gogh watercolours, for no other reason than that they suited my budget at the time I wanted to invest in watercolours. 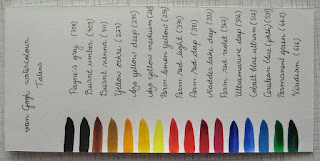 The other exercise I did was to grab a pile of magazines and select a colour. I then flicked through the magazines and cut out swatches of that colour in different values and leanings. I didn't analyse too much, just cut out colours that suited my mood and that I felt were related. I was quite surprised by how much colour I found in these magazines. It wasn't difficult at all to fill a page, but perhaps it was because I chose pink. Pink is pretty hot this spring, it seems. We'll see what happens when I do the next colour.

Next, I glued the swatches onto a sketchbook page in an arrangement that was pleasing to me, and then I studied the different values and leanings and tried to mix them with my watercolours. This will be a really useful reference in the future, and I wonder why on earth I haven't done this before. I guess I needed someone to point it out to me. 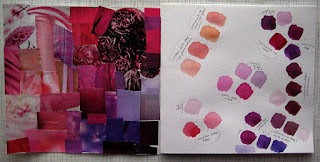 For a good reason Melanie calls herself 'agent provocateur' on her webpage. She's very generous with her knowledge, and through her blog and video challenges on YouTube she has done much to help me along on my own creative journey. Anyone who wants to learn some really cool things to do with their sketchbook or visual journal, and who wants to learn how to use what they have in their sketchbook as a starting point for textile work should check out Melanie's new book, as well as her first book Inspired to Quilt, which I have mentioned many times before on this blog.

Thanks for visiting, and stay tuned for more of my explorations into colour and cloth. - Annika

I just had to post a couple of images of my spider lily, which is in bloom. It's been many years since the last time, and I've been waiting and hoping every spring since that. To my great joy I discovered a flower stem a week ago and today the first of five buds opened. The scent is wonderful: vanilla and cardamom. I keep returning to it to admire its beauty and inhale the scent. 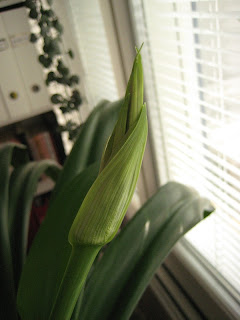 The first bloom has opened 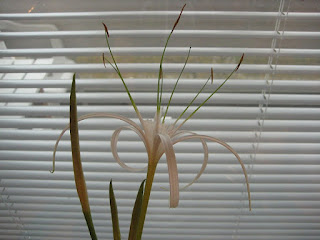 Isn't it wonderful? It's like a little piece of Thailand in my own home.
Posted by Annika at 20:07 3 comments:

One of my goals when I was on vacation recently was to explore Procion MX dyes in a variety of ways. I started by dyeing fabric with a low-water immersion technique (i.e. where you use just a small amount of dye instead of letting the fabric lie in a dye bath), and then I moved on to working with thickened dye. Some of my readers may be unfamiliar with the concept of thickened dye, so I'll explain it briefly. Thickened dye is simply a dye solution which has been thickened into a paste with the help of something like sodium alginate. Sodium alginate is made from seaweed, and mixed with water it turns into a gelly-like paste to which you add the dye. So why thicken dye and use that instead of fabric paint, you may ask? The main difference between fabric paint and thickened dye is that fabric paint lies on the surface of the fabric and stiffens it, whereas thickened dye is absorbed into the fibres, and when the excess dye and print paste is washed away, the fabric is just as soft as before. Depending on what effect you're after, you can work with either, or even both. 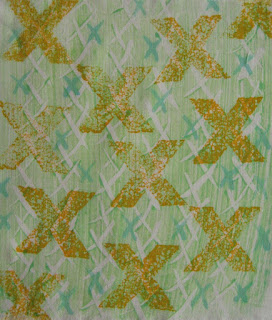 After that I felt a bit bolder and made stronger marks with the brush, also on top of a monoprinted fabric. 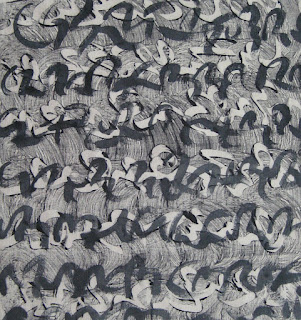 The next thing I tried was to experiment with thicker and thinner dye. I kept adding water to the thickened dye while I was working, to see how thin I could make it before it became too thin. If the paint is too thick it's difficult to apply, but if it's too thin it'll spread too much on the fabric. 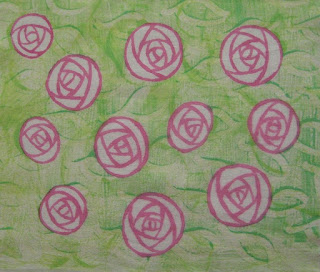 This rose was painted with thicker dye. It was pretty hard work to get the lines even. 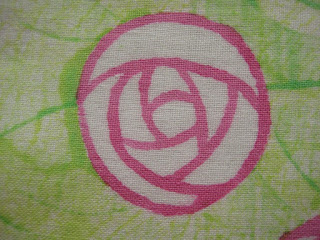 This rose was painted with a very thin dye. It was easier to apply the dye, but as you can see, the lines are thicker and fuzzier than in the first rose. 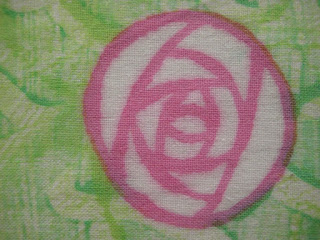 The next sample was printed with a silkscreen over freezer paper bird shapes that I had ironed onto the fabric, and before I removed the masks I printed the surface with bubble wrap. After the masks were removed I filled in the details with thickened dye and a small brush. As expected, the lines that were painted on the dry areas inside the bird shapes wet on dry are crisp, whereas the ones I painted outside the birds wet on wet are fuzzier. 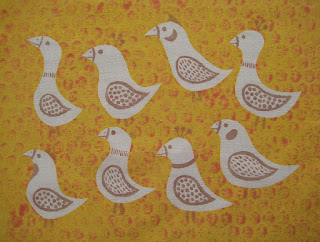 The next sample is only screen printed. It's an example of a positive print, where I've cut out a motif from ordinary printer paper and slid the paper with the tree-shaped hole under the silk screen and squeegeed thickened dye over the paper stencil. 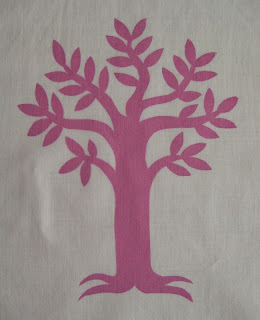 I cut the tree out carefully with a craft knife and could use the tree shape as a mask and print a negative image too. I'm amazed at how crisp the lines are in these two prints. You wouldn't believe that these prints are made with a simple printer paper stencil, would you? 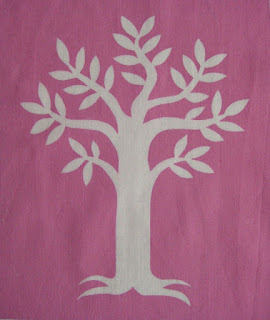 The printer paper stencil I used. 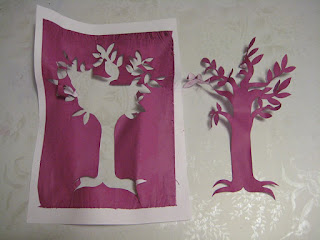 In this sample I used a commercial letter mask by Tim Holtz. Here I poured some purple dye over the screen before I pulled yellow pain with a squeegee. I love the effect! 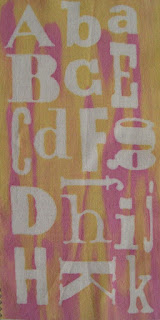 In this last sample I dye painted a motif with a narrow flat brush. I did this sample last night and it is still batching. I enjoyed working with the flat brush, as I found it easier to make thick and thin lines with this brush than with the round brushes I tried earlier. 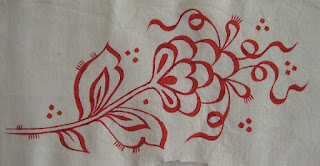 And that's all folks. I've put away all my dyeing utensils for now, and my little home is returned to order until the next time. Which I hope will be soon, because I've had a lot of fun and there's plenty more interesting things to try. So watch this space. ;-)

Thanks for reading this far, and I hope to see you again soon! - Annika
Posted by Annika at 14:58 7 comments:

So now I've dyed all this fabric: 72 differently coloured skinny quarters in all. What do I do with them? The colours are yummy, but let's face it: it's a little boring with just flat colour.

In my last blog post I showed you a flour resist technique I tried on some of my hand dyed fabrics. Here is the next thing I tried: stamping, monoprinting and stencilling with thickened Procion MX dye. I even tried monoprinting with a little stamp. Anything I could think of. (And of course you could do all the things I describe below with ordinary fabric paint too.) Here's some of my favourite samples: 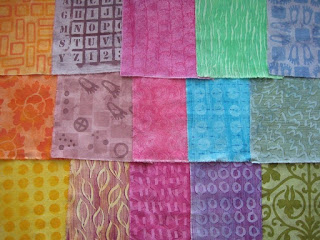 Monoprinting. The pattern is made with a sponge dauber. I really like this effect. You'll find an image of the sponge dauber I used when you scroll down. 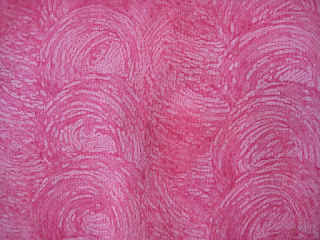 Stencilling. I used the stencil I so painstakingly cut a while back. The stencil is really quite unwieldy and not an example of a good stencil, as it's nearly impossible to handle as it is. The shapes get tangled and it's a nightmare to work with. This time, however, I put it under a silk screen, which made the application of thickened dye a lot easier. 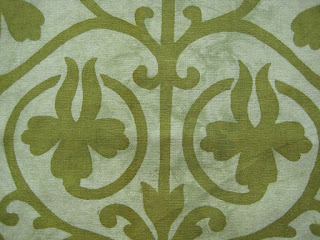 Monoprinting. The pattern in this monoprint is made with a cheap paint brush and a silicone paint shaper. This technique quickly became a favourite. You'll find an image of the paint shaper I used when you scroll down. 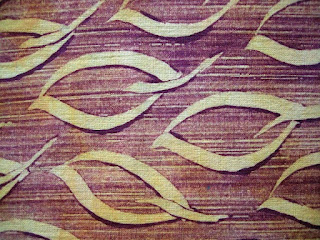 Monoprinting with a stamp. I should have explored this technique a little more than I did as it was great fun. I combined a simple square-shaped stamp with monoprinting. I applied thickened dye to the stamp and made marks on the surface before printing. 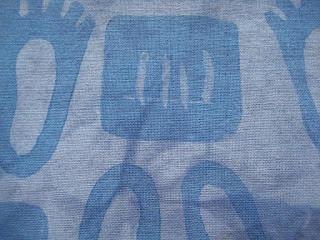 My favourite tools: the humble sponge dauber and a silicone paint shaper: 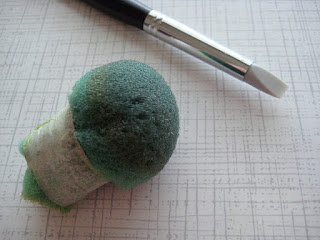 I've written a whole blog entry about the paint shaper before, when I discovered that it could be used for applying masking fluid on paper. Check it out here.

This is a sight that makes my heart sing: 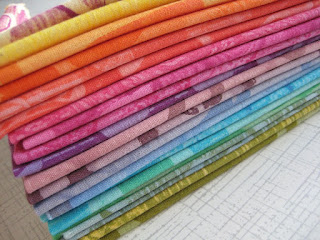 But wait - there's more! I've also tried screen printing and direct dye painting with thickened dye, so stay tuned for that. I just need to wash the fabrics before I can show you the results.

Thanks for visiting my blog and see you again soon! - Annika
Posted by Annika at 19:01 1 comment: