I was inspired by a recent blog post by Melanie Testa, where she writes that she's been printing cloth for years, and now wants to use up her stash completely instead of stashing and storing fabric. I can relate to that. I have loads of my own fabrics in my stash too. Some of the cloth is ugly, some is precious to me. But the point is: there is no point in storing it. It deserves to be used! "Using the things you have and make causes you to make more, doesn’t it?" Melanie says. And she's right! Whatever fabric I've dyed or printed - I can make more of! And if there is one that is exquisitely special and unrepeatable, well, why not use it for something I use every day so that I can enjoy it all the time? Why should I keep it folded up in a box? And when I make more fabric, there will be more exquisitely special and unrepeatable fabrics to use.

So, as a warm-up, I decided to make a coaster set from some of my hand-dyed fabrics that have a Japanese feel to me. I combined them with linen as a backing fabric, as I love the combination of printed cotton and plain linen. 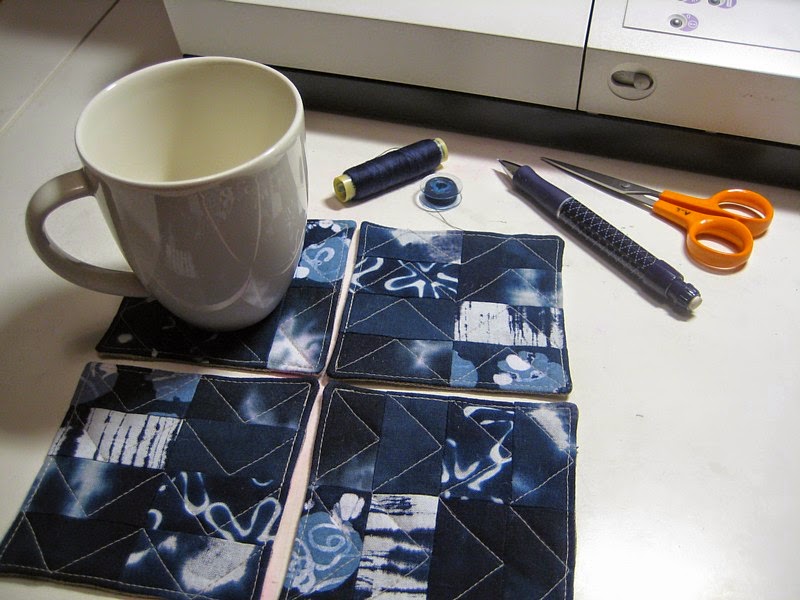 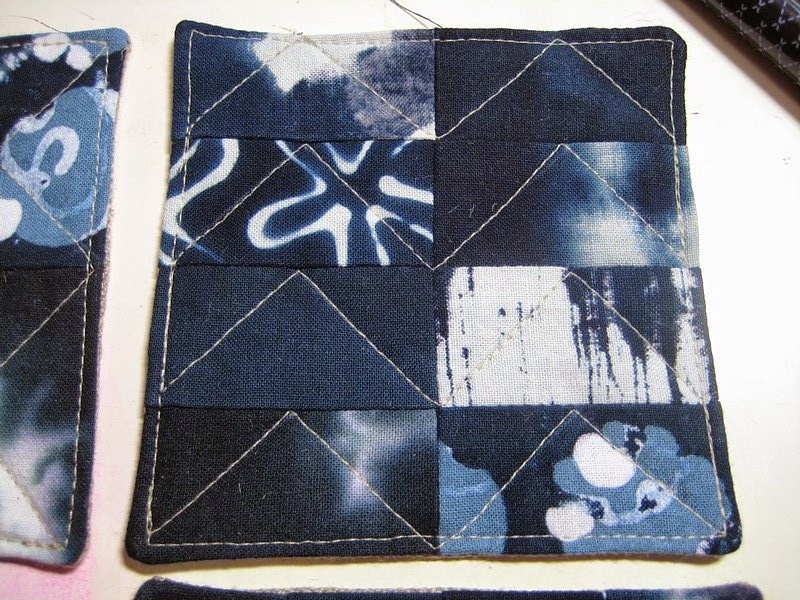 The techniques that have been used to pattern the fabrics are: low water immersion dyeing, shibori, direct dye painting and printing, soy wax resist and discharge. I was quite surprised by how many techniques I'd managed to tick off! 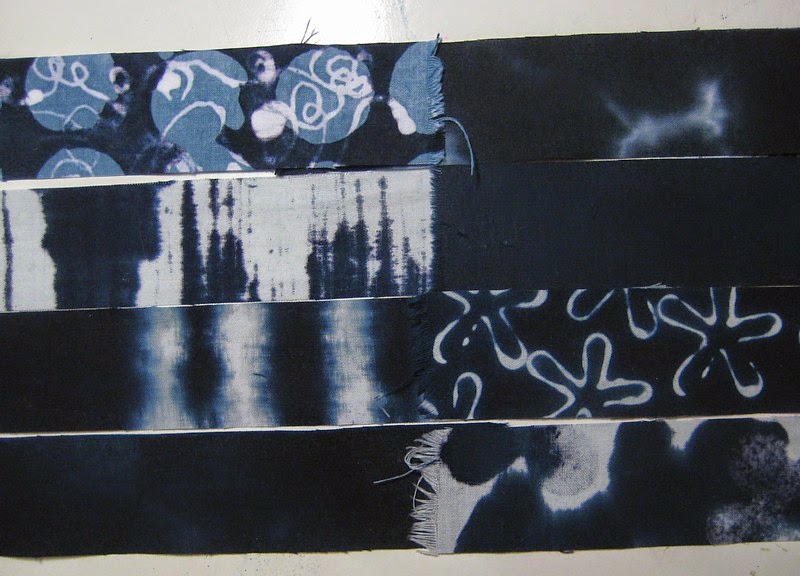 Thanks for visiting my blog! Go forth, my friend, and use your fabrics. And then: make (or buy) more lovely fabric!

By the end of last November mixed-media artist Julie Fei-Fan Balzer announced that December would be 'Carve December', i.e. that she would carve a stamp every day that month. Months ago I'd bought Julie's book Carve, Stamp, Play: Designing and Creating Custom Stamps, and I'd been eager to do try the techniques she describes in the book, but hadn't found time for it. When Carve December was announced I decided to take the opportunity to finally do some of the exercises in the book, and to develop my stamp-carving skills. I vaguely aimed for a stamp a day, but suspected that I wouldn't be disciplined enough to actually reach that goal. December is, as you know, a busy month. And I didn't reach 31 stamps. However, I did carve 20 stamps, which I'm really pleased with, because some of those stamps were quite complicated and time-consuming. Here's the whole collection: 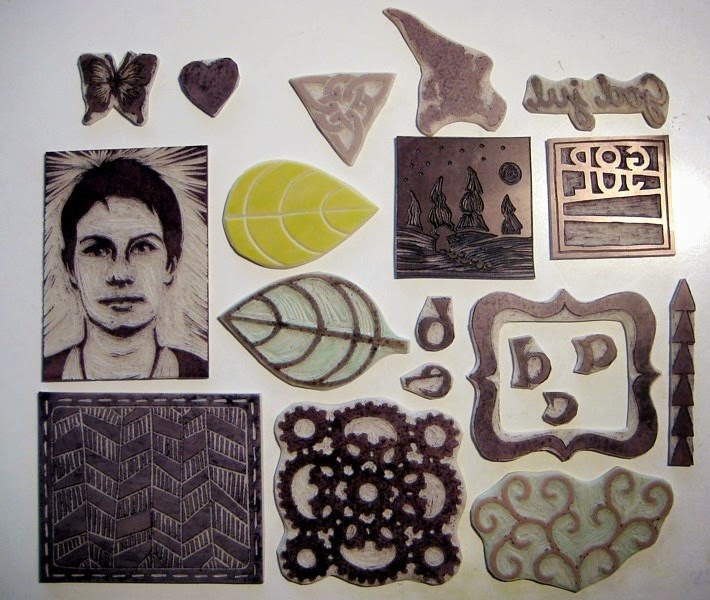 I followed Julie's instructions very closely in the beginning, because obviously there was a reason why she'd included each exercise, and I didn't want to miss some important point. And I'm really glad I did because quite frankly, I was really surprised by the scale of the stamps - they were much smaller than the stamps I'd carved earlier on my own. When I reached the butterfly, I was appalled by the size: 2,5 x 2,5 cm (1 x 1 inches)! That's impossible, I thought. But I decided to give it a try, and not give up immediately, even if it proved to be as difficult as I thought. And here's the result: 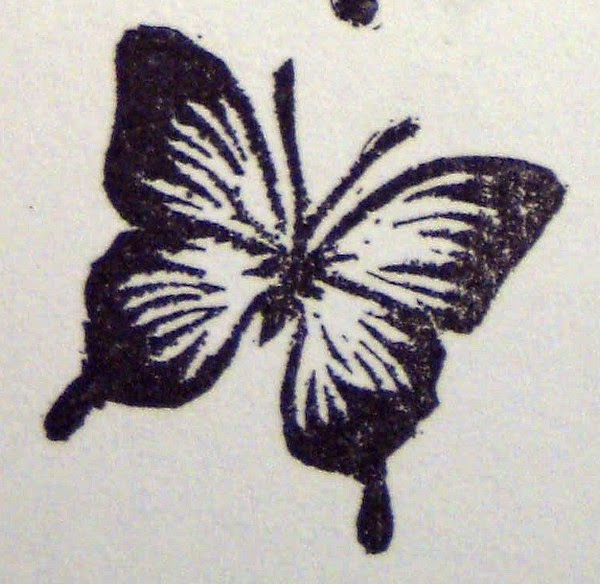 I was amazed by the detail I'd managed to capture, and my confidence soared. I was using a linoleum-like material called SoftCut (Speedy Carve is the material that Julie uses, but it's not available where I live), and so far I hadn't been completely sold on it. It's very difficult to draw on the material, and it has a greasy surface which defies any pencil, pen or marker. This means that it's difficult to both transfer images and to make them stay on the surface without rubbing off. I developed a method where I started by washing the material with soap and warm water, and then rubbing the surface dry with a paper towel, and thus removing most of the grease. I transferred the images by drawing with graphite on a piece of paper and then rubbing the image against the surface. I then used an alcohol marker to make the markings more permanent. They would still rub off, but they were a bit more permanent.

My method of mounting the stamps that I've carved is to use an acrylic block, to which I've attached Tack'n'Peel by Tsukineko. Tack'n'Peel is a sticky film, which you glue onto a block and can use over and over again. You just attach the stamp to the sticky surface, and after you've stamped your image you peel off the stamp and your block is ready for the next stamp. That is a great space-saver! 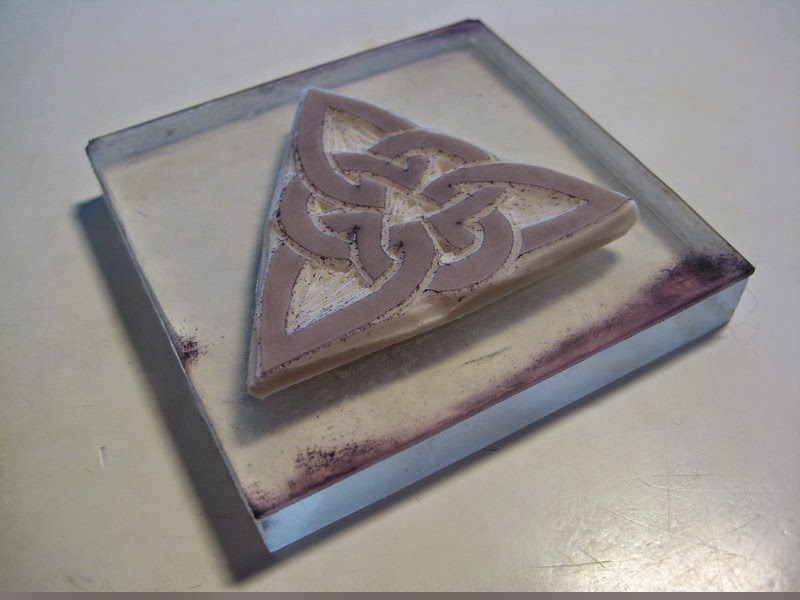 Here I've played with the triangular knot stamp to create a pattern: I tried a self-portrait, a lace pattern based on something that I crocheted many years ago, a leaf set (filling and outline) and several Christmas-related stamp. 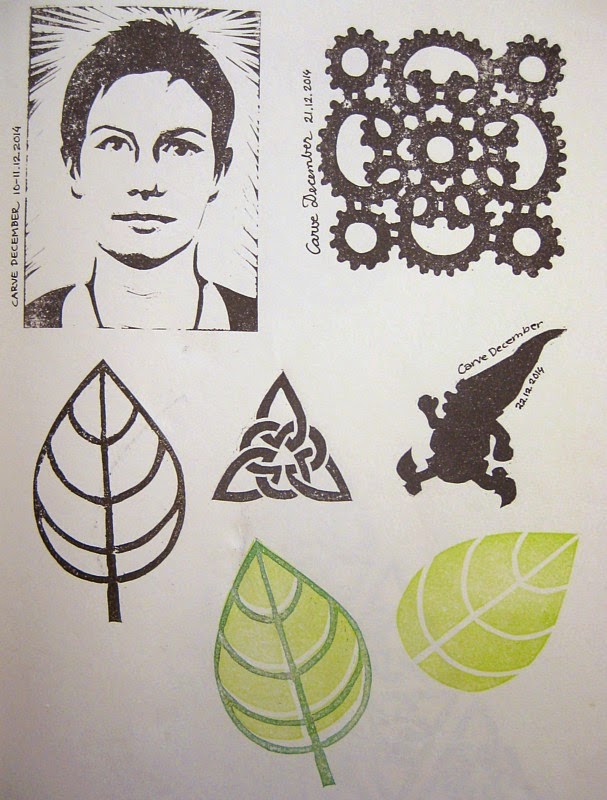 I love this stamping technique, which I learned from Julie's blog. 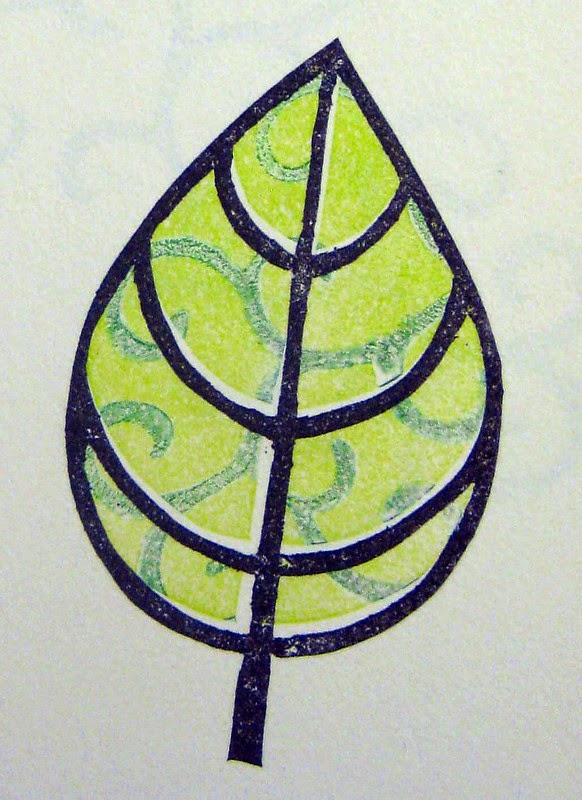 Word stamp ("Merry Christmas"), and the beginnings of an alphabet set with Celtic-style letters: 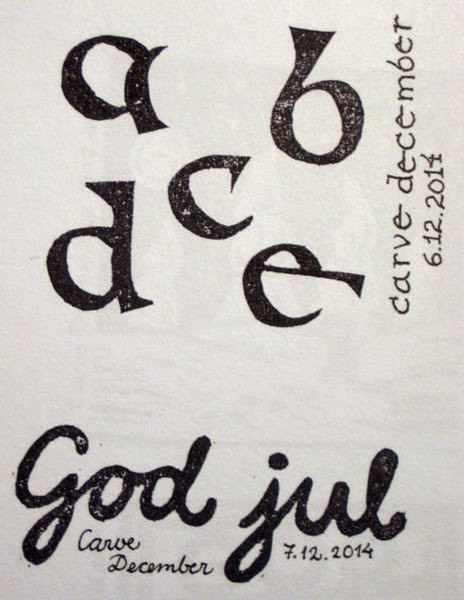 These swirls are simple, but took a long time to carve since the lines are so thin. I removed a lot more material than what was left on the stamp. 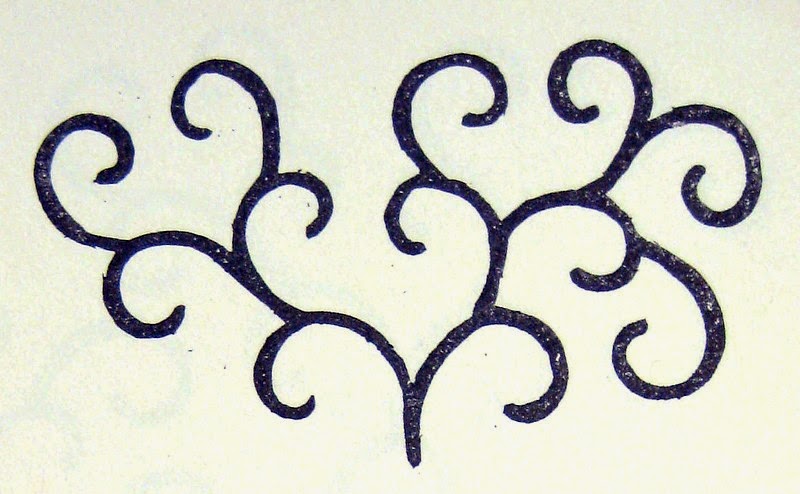 I very much enjoyed making these stamps, and I appreciated the fact that you don't need a lot of materials and tools to do this, and there is wery little cleaning up afterwards. A lot of the things I like to do demand a lot of organisation and tidying up afterwards, so this was definitely fun for a change! These exercises gave me a lot more confidence, and I know that it'll be much easier to pick up some SoftCut and make more stamps now that I've developed a technique and seen what is possible. I hope I've inspired you to pick up a piece of rubber or linoleum, and to give it a go too!

Thanks for visiting, and see you again soon!

I haven't made many New Year's resolutions, but one thing I did promise myself was that this year I was going to make my own cover for my calendar. The calendar that I use has a clear sleeve for a cover, which means that you can slip any paper into it to make your own cover. Clever! I had the same calendar last year, but even though I had a whole year to do it, I didn't manage to change the image that came with the calender even once. Pretty pathetic. So I promised myself that this year will be different.


(The text says "Make your own cover") 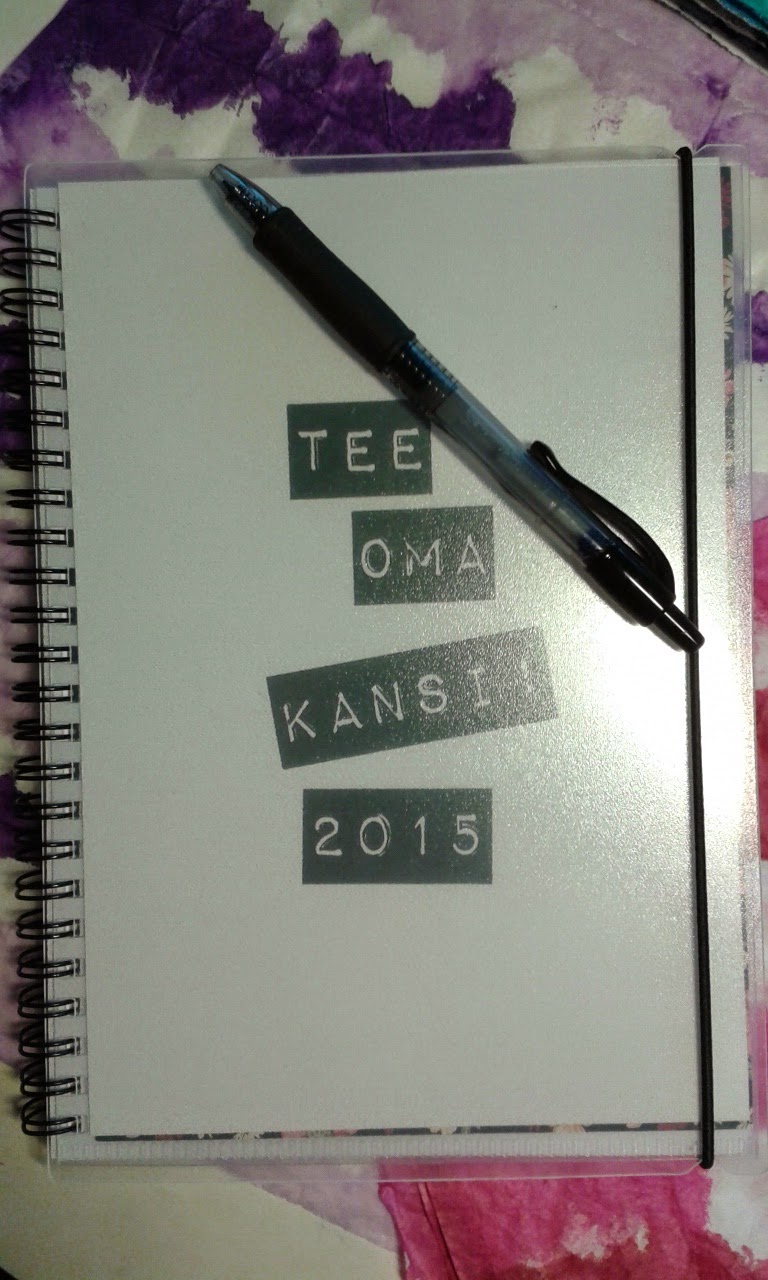 Said and done. I worked through a Dina Wakely workshop today, and when the page was finished I realised that it would be the perfect cover for January! The workshop was all about what you can do when you've worked so many layers on a page that you reach the 'Now what?!?' stage. You know, when you realise that you loved your work four layers ago, but now you feel slightly sick when you look at it. The answer is that you cover up most of it, and by the magic of acrylic paint your page is saved and you have some neat artwork to enjoy.


This is the stage when I loved my page. So I took a photograph of it, as a memento, because I knew that Dina was going to make me push the page to the extreme. 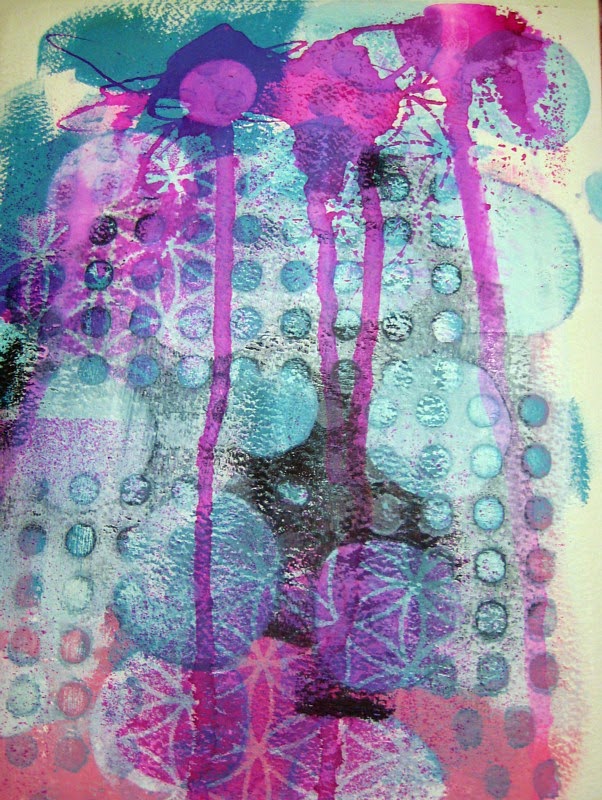 I particularly love this part. Now, say good-bye to it. 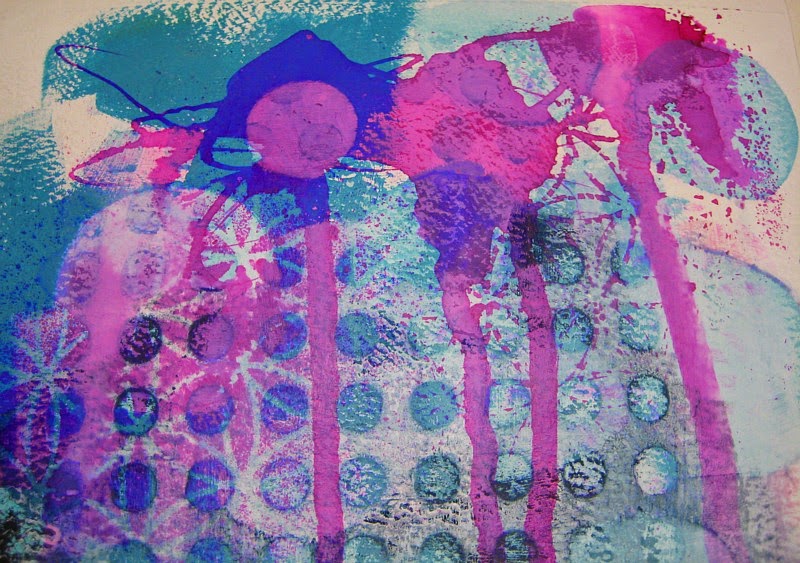 At this point I wasn't very happy about the page any longer. But I kept the faith. 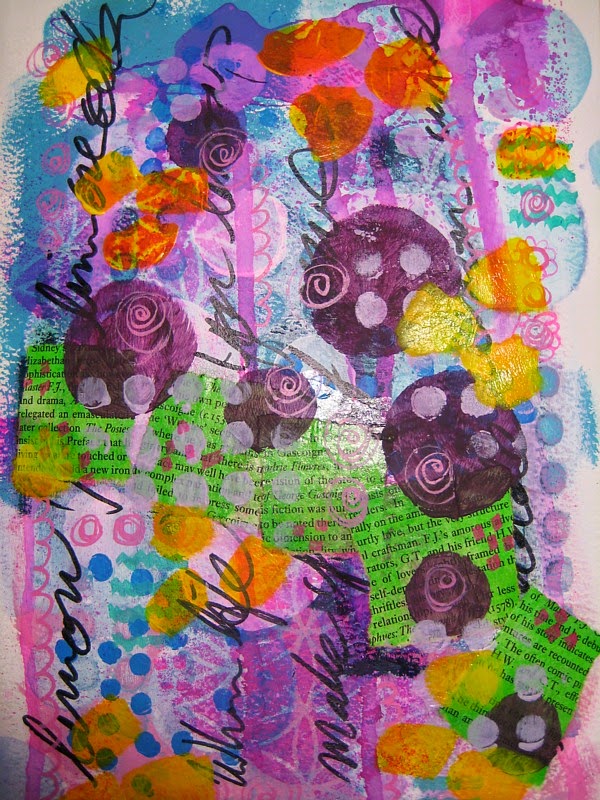 And here is the final page, after the big cover-up. Pretty amazing what a bit of paint can do. I scanned the artwork and printed the image with my laser printer, and voilà, my very own cover. And the first New Year's resolution has already been fulfilled! 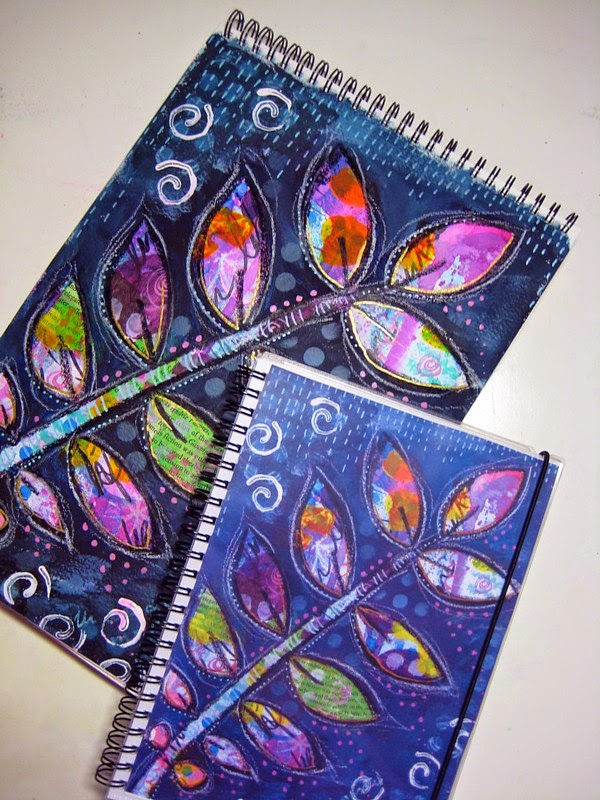 Thanks for dropping by, and I hope you'll have a wonderful and creative 2015!