It's time for another quick Franka update. By now I've added the flowers and the fish and started working on the thought bubble. 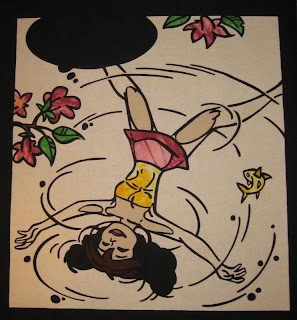 All those tiny spaces inside the letters... They were a total surprise to me. I hadn't noticed them before I drew the outside of the letters. It's probably just as well I didn't. :D 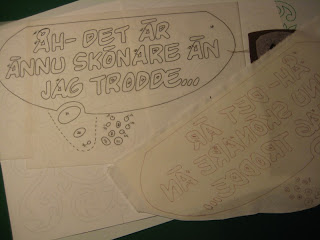 Behind the thought bubble you can catch a glimpse of another project, which turned out to be a little more ambitious than I expected. That's perfectly normal in my world. I still haven't learned that whenever I think "That shouldn't be too hard" or "That shouldn't take too long", an alarm bell should go off. But it's probably just as well it doesn't. :D
Posted by Annika at 21:06

Email ThisBlogThis!Share to TwitterShare to FacebookShare to Pinterest
Labels: Franka