I've done a good job of postponing this blog entry, which I originally meant to write about a month ago, when I was participating in an online course in stencilling with Melanie Testa. I wrote the entry New Patterns, which was supposed to start with me telling you that I've quit my job as a translator in order to work as a crafts teacher for a year, and end with some of the new patterns that I'd created in the workshop. Well, as a person who's worked with words and text most of my adult life, I can find it hard to turn off the tap when I get started on a subject, so there wasn't any space for stencilling after I'd finished with my life story. In New Patterns, Part II, I did a warm-up excercise in preparation for the real thing, with stencilled graffiti I'd spotted during my recent trip to Estonia, but... And then there were the Midsummer celebrations... And then my vacation started, and as usual, the first few days of my vacations are usually spent in some kind of stupor. This has become a pattern too, and I consider it quite normal nowadays. After 3-4 days I usually wake up, look around in amazement and get cracking.

As I've mentioned before, Melanie Testa nowadays has a new teaching website, The Clever Guild, where you can take online courses. I took the Stencil Magic workshop, and although I didn't do as much classwork as I wanted to due to a busy schedule and rather overcooked brain, I learned a lot about stencilling.

There is more to stencilling than I ever imagined, and certainly more than one way of using a stencil. Also, there's no right or wrong way. The way you like to use the stencil is the right way, whether it is with fabric paints, artist acrylics, watercolours, pencils, pens, sprays... with the stencil used in a traditional way, or as a template for creating patterns that can be filled in with a brush, or simply as a mask. You can use stencils on cloth and walls, but also in your sketchbook, on your cakes and bread, and why not on a plate before you serve food (in paprika or cocoa powder)! And you don't have to fill in the whole stencil shape either: you can be selective, or fade out or break up the shapes. The last idea is something I still need to explore more. In the page below, made with watercolour paint and pencils, acrylic paint and permanent pen, I've used a commercial stencil (big circles) and a found stencil (sequin waste) to create a painted and discharged background, and then I've stencilled swirls and leaf shapes on top, before glueing a tracing paper bird on top. (I also learned the tracing paper technique from Melanie; e.g. in her latest book Dreaming from the Journal Page, and I'm pretty sure it will be included in her up-coming workshop Dream Journals too. Look at the end of this blog post for more info). 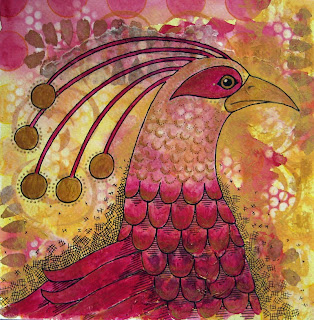 Stencils can be bought, made or found, and every type of stencil has its own place in the scheme of things. A commercial stencil can be the right choice for one thing, whereas a handcut original stencil is unbeatable for other things. Found object stencils (i.e. any flat material with holes in it) are a league of their own, and can create patterns that are difficult to produce in any other way.

Here's a simple stencil that I developed from an interesting water plant and printed on handdyed fabric: 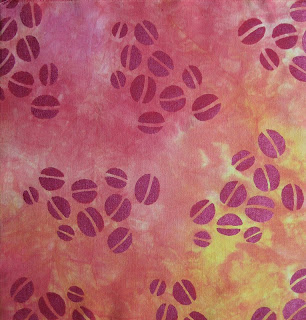 The script-like stencil was developed from brush doodles I made in my sketchbook, and the citrus-like motif was inspired by an opening in a wall: 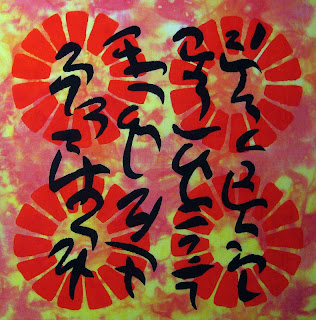 It was an eye-opener for me to realise that stencils can be devoped from a simple line drawing and that they don't have to be extremely simplified or ornamental: in fact they can be pretty organic, if you have the patience to cut them like that! Below is a poppy I developed from a photograph. First I did some sketches in order to get to know the subject (poppies only have four petals; I didn't know that), and then I tried to think of the poppy shape in terms of shadows. That helped me to develop this stencil, which I'm pretty pleased with, if I may say so myself. I also wanted to create stencils that mimic paint splashes, and after some unsuccessful attempts at drawing authentic-looking splashes, it dawned on me to make splashes in my sketchbook, and to use my computer skills to enlarge them to the appropriate size. With a computer, camera/scanner, simple image editing software (or even something like MS Word) and some basic computer skills, you can manipulate your material in a number of ways. I drew the poppy in a small scale, but I'm planning to enlarge it and print it on a t-shirt. The original drawing is just a starting point. It may sound obvious to some of you, but it hasn't been obvious to me. For a long time a drawing was an end-product in my world. It's only quite recently that I've realised that a drawing can be the first step in a line of other exciting things. 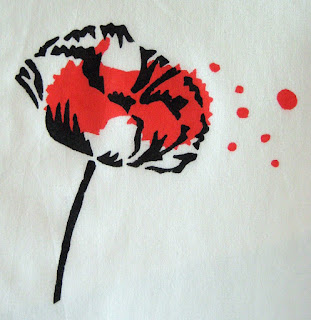 Hot tip: Melanie's next online class Dream Journals is coming up, with 20 July as the starting date. It's about tips and techniques for keeping a visual journal (diary/sketchbook), and I know it's going to be great. Can't wait for it to start! Check it out on Melanie's blog or The Clever Guild website!

Thanks for visiting, and see you again soon! - Annika
Posted by Annika at 13:16