Lazy Days Calling to You
My first week of vacation has flown past with mixed activities. In the first half of the week I did quite a bit of decluttering. One of my bookcases was overflowing with stuff, so I took care of that, and I threw away heaps of paper. I also spent time drawing. I did my first page for The Sketchbook Challenge, where I decided to use dragons to illustrate the four elements. I started with water. You can see the page on Flickr, where I’ve created sets to organise the stuff that I upload. In the set called ‘An Object a Day’ you’ll find the objects that I draw for each day I’m on vacation. I’ve managed to follow the rule to draw an object every day so far, even though it has meant that I’ve had to draw late in the evening, on a shaky train and after a glass of wine. Drawing every day, even in funny circumstances, makes it more spontaneous, and counteracts my need to create masterpieces every time I put pen to paper. I used to draw all the time when I was younger, but the habit dwindled down to less and less, and for a number of years I didn’t draw at all. I wanted to, but felt totally helpless and blank as soon as I had paper in front of me and a pencil in my hand. Worst of all: it had become too much of an effort to draw –  too much work, too demanding, to much pressure. Crazy Days. I decided to upload my pages to Flickr, because it helps me stick to my plan. It makes it more difficult to cheat.  ;-) 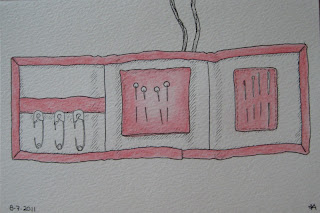 My travel sewing kit, drawn on a shaky train journey
However, by Wednesday I was starting to feel a bit desperate, because I didn’t feel that I was really enjoying my vacation. The days were like any old weekend where I potter around the house. (I can have weird reactions in the beginning of my vacations. I’m sure there’s a psychological term for it…) I decided to take a train and visit a good friend in Snappertuna on Thursday. She met me at the train station and we set off to Fiskars Village. Those of you who use Fiskars tools: this is where it all started! Check out the cakes we had: 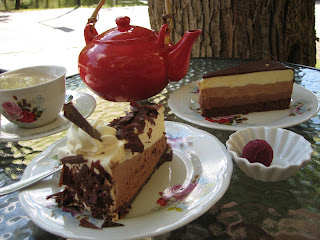 Divine! This is when I felt that my vacation really started. Later we took a walk and ate wild strawberries that grew along the sides of the road. It was a great day.
On the train I started working on a shibori project. I was very inspired by Sue Cavanaugh’s article ‘Extreme Shibori’ in Quilting Arts Magazine (December 2009/January 2010 issue). I decided to try both the mokume and the ori-nui techniques in the same piece and prepared a piece of cotton beforehand: 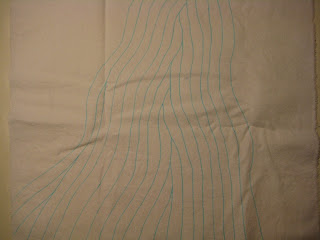 In mokume you sew stitches through one layer of the fabric (red thread), whereas in ori-nui you fold the fabric and sew stiches through two layers along the folded edge (white thread): 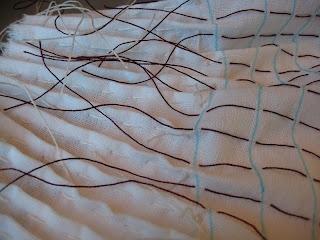 This is what the fabric looks like when all the areas have been filled with stitch. The ori-nui stitches distort the fabric even before you start pulling the threads: 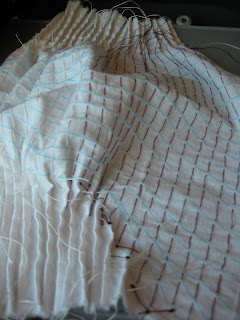 The treads are pulled and the fabric is ready for dyeing. It looks like I’ve created a little shrimp, doesn’t it? I’m quite excited about this technique, but I’ll have to wait a week or so before I can continue, because I’ll be out and about a lot. 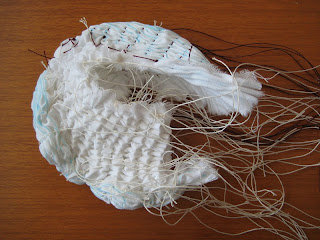 Right now I’m back in Ostrobothnia, where my partner Jarkko and my parents live. I’ll stay here for a few days until Jarkko’s going fishing to Lapland and Mum and I are going off to bonnie Scotland. When we return from Scotland, I'll probably stay in Helsinki and then I'll get out those Procion MX dyes that I'm burning to try again.
We went swimming yesterday, but the water was too brown with humus for us to even consider snorkelling. We need to go by boat to the outer parts of the archipelago to find clearer water, but I suspect that the water is considerably colder there. I do miss swimming in Thailand. The warm, clear water and the funny, cute and handsome water creatures that I met there. Um.. speaking of funny creatures...
We had a little uninvited (but not unwelcome) guest the other day:

I almost stepped on this young cat that had snuck unnoticed into Jarkko’s flat through the open door to the backyard. It was extremely friendly, unafraid and curious, and made itself very much at home here. 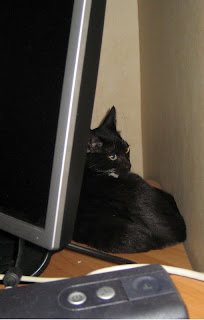 It tried Jarkko’s keyboard, but it left the mouse alone.
Here, finally, is a sneak peak of my next project that I’m preparing for the next train journey back to Helsinki. More about that later. 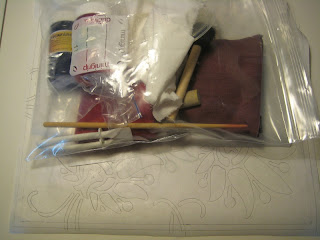 Email ThisBlogThis!Share to TwitterShare to FacebookShare to Pinterest
Labels: An Object a Day, Cat, Fiskars, Shibori, The Sketchbook Challenge